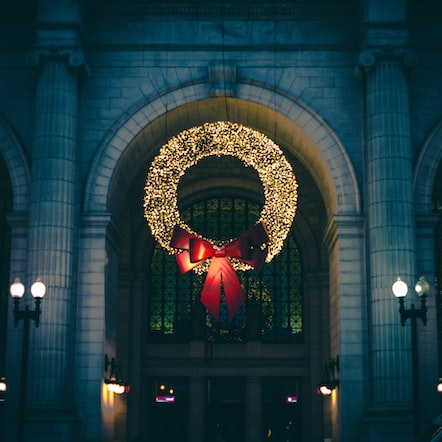 Even if one is not religious, ritual and tradition can be life-enhancing. Both of my parents are dead now, but they live on in my Christmas traditions. My mother had made a practice of a special dinner on Christmas Eve, for example. Definitely not a feast, but not quite a fast: tuna and crackers, with tomato soup, eaten by the light of advent wreath and Christmas tree, before an early bedtime. It was a solemn affair, conducted in darkness and silence, a pause to reflect before the festivities of Christmas day. Sometimes we had green Jello, and sometimes gingerbread cookies for dessert, but the essential mood remained one of simplicity and reflection.

For most of the years I lived with my parents, my father was the one who put up the tree and strung the lights on it, before the rest of us put on any other decorations. Somewhere around my fifteenth year (give or take a few) my father announced that after some thirty-odd years of setting up the tree, he was now “done”, and would no longer be doing it.

I don’t really know his actual reasons, but despite his rather defensive stance about the matter, I somehow got the impression that it was a passing of the torch, an invitation for me to take over one of the “manly duties” of the household, now that all my brothers were grown and moved out. So that year, I assembled and lit the tree myself for the first time (although I had been helping in some fashion – or at least trying to – for as far back as I could remember).

Leslie and I hadn’t really planned to “do Christmas” this year. She had in fact reached a shaky pact with her near relatives not to exchange gifts this year, but gift-giving is a funny thing and you can never really predict whether someone will break truce and send you a present anyway, the bastards. 🙂

But we hadn’t really decided not to do Christmas, either. And the other night when I went grocery shopping to make sure we’d have food enough to survive the closing of stores and restaurants, it occurred to me that maybe I should pick up some tuna, and crackers, and tomato soup. I didn’t want to bother making Jello and they had no pre-made green ones, so I picked up some festively green honeydew melon instead, knowing my mother’s choice of foods was driven by the red and green colors of the soup and Jello, respectively.

Leslie’s family had a different Christmas Eve tradition: shrimp cocktail. Unfortunately, I’d forgotten this, and had to go back out to get the shrimp on Christmas Eve, and didn’t get the ingredients for cocktail sauce, either. But Leslie was able to improvise an alternative seasoning, once she got home from the store [link not safe for work!], where men were still streaming in until 8pm to buy last-minute gifts for their wives or girlfriends (or both, in many cases) .

And while the soup was heating up, I dug a box out of the hall closet, and unpacked a tiny artificial tree, already strung with lights and garland. I draped a table with the tree skirt, and added ornaments to the tree. Then we turned out the lights, and partook deeply of all our traditions.